Sí Se Puede! (We Can Do It!) Women’s Cooperative is an eco-friendly housecleaning business founded in Sunset Park, Brooklyn in August 2006.

Born out of a project led by the Center for Family Life community organization, Sí Se Puede is run and owned by recent immigrants interested in taking control of their own working lives. Since opening their doors they have more than doubled in size, creating quality working and ownership opportunities during a period of widespread economic crisis. 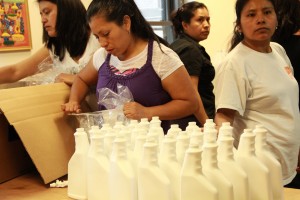 The Working World has been in touch with Sí Se Puede since opening our New York office in Summer 2011. We attended several biweekly meetings, introducing our work, getting to know the women, and witnessing firsthand how democratic decision making can nurture a powerful business model.

In early 2012, several women from the cooperative approached The Working World to discuss the possibility of creating their own green cleaning products. The initial impetus was a simple desire to work under healthier and more eco-friendly circumstances. Earning almost three times as much as when they were working for other business owners, these women were even willing to sacrifice a few dollars from their hourly incomes to stop using harmful chemicals in their workplace. From these humble beginnings a plan began to emerge.

Working together with a sub-committee from the cooperative, we began to explore different all-natural formulas to substitute for the products they were currently using. Over the course of several sessions we identified and perfected two formulas — an all-purpose cleaner and a deep wood cleaner — that the women would begin to use in their daily work. 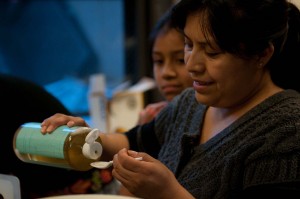 Around these two products we have designed a broad-reaching campaign, including branding, marketing, and an outreach campaign to raise awareness among Sí Se Puede’s clientele about the values the company represents and what they’re trying to do with this latest project. In addition to raising Sí Se Puede’s profile and hopefully broadening its client base, we also hope to begin selling these products to current clients and perhaps even offering them in local stores throughout New York.

Through this project the women of Sí Se Puede now hope to live healthier, be more conscious of their   communities and broader environment, increase their clientele and their hourly income, and create even more quality work and ownership possibilities in Brooklyn.

These are the horizons for a strong democratic business following the triple bottom line of People, Planet, and Profits. This is collaboration at its best and most ambitious. This is a model for a different way of doing business in the 21st Century.